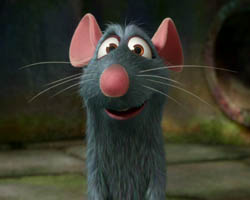 Hold on to your pants people.

I know catch your breath. It’s been 2 or 3 years so we figured we better fork out the cash and take the kids to see Ratatouille! And for once I actually didn’t cry during a movie. I came really close during one part, but I was actually able to hold it together. Although, it usually doesn’t take much. I mean I cried during Happy Feet! Who the heck cries during that movie?? Yes, I did. And by the way, that was a movie I went to see during the “Good Behavior Movie” that my school takes the kids to. So that was not a wallet emptying, family event.

Anyway, so as far as the movie. It was great. For Monkey Boy it was his first movie and he did amazingly well. Blurting out 4-5 times, bathroom breaks 3 times, crying once, because we limited the amount of Sprite he had. For the last 30 minutes or so, he was appeased by stuffing his face with popcorn. Besides all that his eyeballs were glued to the movie screen. Considering it’s a 1hr 50min movie PLUS 20 minutes of previews, he did great!

TV Boy’s critique was that it was good, but it wasn’t the best movie he’s ever seen. I think it was another great movie by PIXAR. If you’ve seen it, what did ya think about it?

This entry was posted in Bloggin' It, Entertain me, I am Woman..., Mama Drama, Me, Myself, & I, Monkey Boy, Movies, Mr. Mag, The Fab 4, TV Boy. Bookmark the permalink.

1 Response to Ladies and Gentlemen