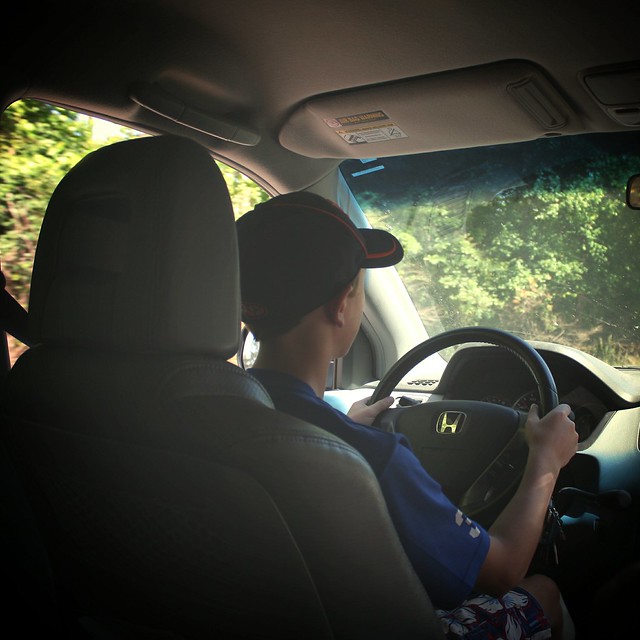 I haven’t talked about how scary this has been for me. Ever since Teenager got his driving permit, I have had a serious internal struggle. I was the first person that he drove with. You see when I took him to get his driving permit a few weeks ago, the first thing he asked to do when we got home, was of course, to drive. I gave in and let him drive around our block and through our quiet (not a lot of traffic) neighborhood.

Rob continued to take him the next week and he finally felt confident enough to let him venture off onto busier streets. Then there came the day when we were going out to the soccer fields and Teenager drove all of us out there. I was sitting in the back seat. My internal “scared-meter” continued to rise.
“Oh! We’re going to fast!”
“Oh! We’re going to run off the road!”
“Oh! You made that turn way too fast!”
No, I didn’t think we were going to die, but I did want to holler out. I wasn’t in the passenger seat and I wasn’t 2nd in control. Now, if I really thought we were about to die, no doubt, I would have yelled!

Since it’s summer and we’re home a lot together, I’ve been trying to let him drive every time we go somewhere. It is hard giving up the keys to him, because it is ‘easier’ to be the driver and be in control. However, practice and experience is what is going to make him a better driver. So in 244 days when he gets his license, I will feel confident that he is the very best driver he can be. Most importantly, he’s understands out to be a defensive driver and is prepared for all those people out there who are not putting driving first!

This entry was posted in 365 in 2013, Mama Drama, Pics Pics Pics, TV Boy. Bookmark the permalink.